The Last of the Antenna TV Generation

It can be mildly frustrating being on the dividing line between generations. I am on the younger end of “Generation X,” and a few years too old to be a “Millennial.” I’m that between-the-cracks age that is young enough to spend a lot of money on games from Steam, but old enough to remember Betamax tapes. Can’t remember John Belushi as an SNL cast member, but can remember Julia Louis-Dreyfus as an SNL cast member. Young enough to have grown up mostly with cable TV and the plethora of options it offers, but old enough to (barely) remember when the family TV in its polished wooden cabinet was still wired to an antenna on the roof, and the smaller TV in the den had rabbit ears. Too young to remember TV sitcoms of the 1960s and early 70s during their original run, but old enough to have seen them when they were still widely syndicated on local channels through the beginning of the 1990s.

So I have a comfortable familiarity with The Beverly Hillbillies, I Dream of Jeannie, My Three Sons, The Addams Family, The Brady Bunch, and so many more, even though I wasn’t around to watch them on a network in prime time when they first aired. People approximately my age are probably the last of those who do know these shows, unless they were “outdoors” in the late afternoons, engaging in “organized sports” or some other pointless shit instead of sprawled in front of the TV where the good stuff was. (Mid-mornings were also a primo time for these shows, perfect for summer vacations and sick days.)

Knowledge of these shows drops off precipitously for people even just a few years younger than me. The mid-1990s would be right when those slightly younger folks graduated from cartoons and kids’ programming to regular TV, and is also right when syndicators began dumping re-runs of long-gone shows in favor of re-runs of shows still being made, which seemed wrong somehow. Not to mention the fact that hot garbage like Home Improvement and Family Matters can’t hold a candle to timeless works of art like Gilligan’s Island and Mr. Ed. Basic cable’s “Nick At Nite” programming kept the flame alive for awhile, but even they began to prefer Fresh Prince of Bel Air to Welcome Back, Kotter by the early 2000s.

(Another influx of truly old-school entertainment came when I slept over at my grandparents, which happened at least one weekend a month from 1977 to 1985. They had only one TV in their house, so I watched what Grandma and Grandpa watched…and they were born in 1909. So it was a parade of Bob Hope specials, The Love Boat with its gallery of washed-up mid-century celebrities, The Lawrence Welk Show, Hee Haw, and the last of gasps the network variety shows, which were almost extinct by the early 1980s. Even at age seven, I remember thinking Barbara Mandrell and the Mandrell Sisters was kind of a horrid trainwreck. Luckily, the grandparents were tucked into their Bert-and-Ernie twin beds at 9:00, so I was free to watch the Duke boys tear ass through Hazzard County, then turn the TV off as Dallas started, and watching the picture shrink to a tiny glowing dot in the middle of the screen that lingered for several minutes.)

The mildly frustrating part comes in when I’m dealing with someone even just a little bit younger (I’m on the cusp, remember?), and realize our frames of reference don’t match up, and then feel incredibly old. (“Remember when Pat Sajak had that famously bad late night talk show? ‘No?’! What do you mean, ‘Who’s Pat Sajak?’! He’s still on TV, for chrissakes! Oh, you only watch streaming shows…”)

A one-sided version of this scenario came up most recently for me when I started listening to the podcast Seincast, which, as you would expect, is a discussion and analysis of individual episodes of Seinfeld (a show I fully supported going into early syndication, because I got to watch even more of it.) The podcast hosts, Vinny and Matt, are for the most part enjoyable and certainly know their Seinfeld…as long as it’s confined to the Seinfeld universe. They are grown men with respectable day jobs (Vinny is actually a pharmacist.) But every so 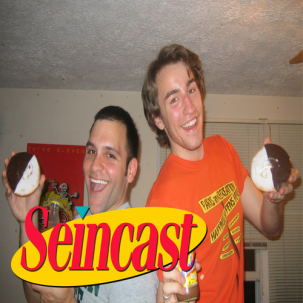 often, I (internally) cry out is dismay as the hosts reveal their status as ignorant pups bumbling across my audio lawn by completely misunderstanding — or missing entirely — an older cultural reference that Seinfeld will make from time to time. I can almost hear the whizzing sound as the name or phrase sails over their heads. How can a someone as grown-up as a pharmacist not recognize a reference to A Streetcar Named Desire? And they seem to not realize Elaine and Jerry’s frequent inside-joke refrain of “all-right-sir” is quoting Tom Snyder. They have admitted to never having seen a second of The Dick Van Dyke Show. They had never heard the old expresson “nothing to sneeze at,” and assumed it was a creation of the show’s writers. This sort of thing will happen at least once per episode, and it makes me start every podcast with the thought, “I wonder what these kids aren’t going to get this time?”

I’m sure poor Vinny and Matt are inundated on the Seincast Facebook and Twitter accounts with corrections or clarifications from crotchety older listeners. But they rarely acknowledge it on the next episode. I admire their “keep moving forward” philosophy, but c’mon, give the old folks some closure. Even stoner comic Doug Benson has a “Corrections Department” during the next episode whenever he or a guest flubs a film fact on the Doug Loves Movies podcast.

For those in the know, a lot of those old TV shows can still be found if you look hard enough. Deep down the cable channel list, between Laotian soap operas and equestrian coverage, you’ll find Antenna TV and MeTV, both of which feature the type of stuff I was raised on. I hadn’t seen Hogan’s Heroes in decades. I’d forgotten how adorably zany Nazis could be.

I first discovered Antenna TV when I heard they were showing old Tonight Show episodes from the Johnny Carson’s Burbank era (1972-1992). As a kid during summer vacations, I would stay up to watch Carson and Late Night with David Letterman. During the school year when I went to bed earlier, I set the timer on the VCR and watched them on tape after school the next day. Carson was a big part of my formative years, and I was excited he would be on regularly once more, from beyond the grave. So I set my TiVo accordingly, and it’s hardened into a daily habit again. I get home from work, handle whatever minor domestic chores need to be done, put on my loungewear, climb into my massage recliner with a cold drink, and the well-known (to some of us) brassy intro to Paul Anka’s Tonight Show theme is blaring out of my TV’s sound bar by 5:30 or a little after.

There is no rhyme or reason to the order that Antenna TV airs the episodes. A Tonight Show from 1991 can be followed the next night by one from 1973. If it’s from 1986 or after, I might actually remember watching it when it originally ran. Antenna TV puts the date of the original broadcast on the opening credits, but I try to avoid looking at it, and attempt to guess the year from the contents of the monologue, which is always topical. The challenge is that current events names almost never stay current. On one episode, Johnny made about six references to a “Tamara Rand.” I gave in and looked her up. Turns out she was a psychic who claimed to have predicted the assassination attempt on Reagan, was exposed as a fraud, and never heard from again after a few weeks in early 1981. But, boy, was she the comedic highlight of that single episode of The Tonight Show. I’m sure they have a reason, but Antenna TV does not air episodes from Johnny’s first ten years (1962-1972) when the show was based in New York, which is a shame because I think that would be pretty fascinating. [EDIT: I just learned that NBC wiped and re-used the tapes from the New York era, and only selected highlights remain.]

The guest panel is often a parade of the semi-recently deceased. I look down the couch, thinking “dead…dead…ooh, still alive…dead…” And I can do that because the guests actually stuck around after their segment, they just moved down to make room for the next guest. If they had to leave early, it was remarked upon as out of the ordinary, and they were ceremoniously ushered off. Conan O’Brien tried to keep this tradition alive until relatively recently, but it hasn’t stuck. No celebrity wants to sit outside of the spotlight and just listen politely. Or, more likely, no celebrity’s publicist wants them to do that.

Then as now, guests were on the show to plug a movie or TV show, and I like to use Wikipedia as a time machine to see the fate of that project in a weird form of internet schadenfreude. “Hmmm…looks like Dead Heat didn’t work out for you, Joe Piscopo. In fact, nothing ever will again. Suzanne Pleschette, you seem really excited about that new TV series. Oh, cancelled after seven episodes? Sorry, dear.” Sometimes I don’t need Wikipedia. “Hey, O.J., guess what you’re going to do in about ten years?”

Even though Johnny Carson supposedly pefected the late night talk show format (based on a template sketched out by Steve Allen — current events monologue followed by a comedy bit at the desk, celebrity guests, maybe an interesting or odd civilian guest, closing with a stand-up comedian or musical guest), what strikes me is how late in Johnny’s run that format hardened into tradition, and how much late night talk shows have changed even from that point. Modern late night shows are first and foremost comedy shows, are very high-energy, and move at a pretty fast clip. Unless it’s a mega-star like George Clooney, a guest gets one segment between commercials. And if the guest or host doesn’t get a laugh every thirty seconds (at least), the show feels dead.

Johnny’s version of the show, at least until its last few seasons, was a genuine talk show, or “chat show” as the Brits accurately call it. Guests just…talked. They weren’t coached by the writing staff, or spoon-fed laugh lines. They would ramble through a lengthy anecdote with minimal payoff. It was often so quiet you could hear an occasional cough from a studio audience member. The post-monlogue desk bit flopped as often as it scored. (You can sometimes see Johnny completely lose interest partway through as the audience sits in what sounds to modern ears like very awkward silence.) Believe it or not, it was actually kind of great — real and relaxed. It was assumed most viewers were winding down and preparing to go to sleep, and none of the content was designed to be viewed in frenetic three-minute clips on the internet the next day. Smoke from Johnny’s under-the-desk cigarette would often drift lazily into the picture as the camera focused on McLean Stevenson talking about his socks for eight minutes. (If it was a 70s episode, both Johnny and the guests would openly puff away. An ashtray was always on the table in front of the guest couch.) Carson bent over backward to make his guest funny or interesting if they weren’t pulling it off for themselves. Amy Irving was a fairly frequent guest. She was (and is) a brilliant actress, and I’m sure she’s a gracious human being, but it was like interviewing a dead carp — you can see Johnny working. (Charles Nelson Reilly, on the other hand, I’ll sometimes rewind and watch twice.) END_OF_DOCUMENT_TOKEN_TO_BE_REPLACED