The Best & Worst of the Solo Pythons, Part 1: Graham Chapman

My website stats have proven conclusively that the most popular segment of this little blog has been “The Best & Worst of the Solo Beatles.” In the true spirit of sequels, I will now take the same basic premise and turn it into something that will likely prove somewhat less popular. Why not take on the solo careers of “The Beatles of Comedy”? 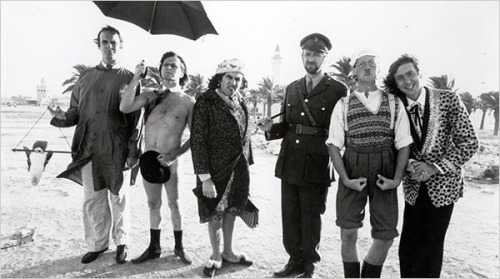 Many collectives of funny folk have been referred to as “The Beatles of Comedy” — from the original Not Ready For Prime Time Players of Saturday Night Live to the cast of Seinfeld. But the group that has truly earned the title is the one that earned it from the Beatles themselves — Monty Python. They were shooting their very first episodes for the BBC in August of 1969, just as the last notes of Abbey Road were being committed to tape and the hassled, harried Apple board meetings were growing particularly hostile. George Harrison has said many times that he believes the impish Spirit of Genius vacated the dying rock band at this moment, and infused itself into the comedy troupe just being born.

As a group, Monty Python produced 45 episodes of Monty Python’s Flying Circus for the BBC, three original feature films, two “compilation” films, two extended original episodes produced for German television, several books and record albums crammed full of material unavailable in any other format, and toured as a live act. No other comedy team can top that output. They hung up their Gumby boots in 1983, but well before that, the six members had begun concurrent solo careers which continue to this day (well, except for one — see below.) Graham Chapman, John Cleese, Terry Gilliam, Eric Idle, Terry Jones, and Michael Palin have produced some very creative and funny works of art — and some dreck.

Here’s the format for our little examinations: Only projects that the individual Pythons had a direct hand in creating will be considered. This means writing or co-writing, directing, producing, or any combination thereof. If we expanded our project to include instances where they simply took an acting job for a paycheck, the “worst” portion would be impossible to sort through, especially concerning John Cleese and Eric Idle. (Every non-superstar actor has to take roles to pay the bills from time to time, but it pains me to say that Idle and Cleese have been particularly non-discriminating and mercenary in this regard, popping up in some of the most notorious turkeys of the last twenty years.)

And unlike the solo Beatles, we are not limiting ourselves to one medium. The solo Pythons have written and/or directed feature films, created TV series, written children’s books, self-help books, novels, and scholarly history books, and produced Broadway musicals, to name just a few endeavors.

There will be Best Project and Worst Project, followed by Should Probably Avoid, and to end on a positive note, a Worth Checking Out. This format will be adhered to strictly, except for the times when it’s not. END_OF_DOCUMENT_TOKEN_TO_BE_REPLACED