The Best & Worst of the Solo Pythons, Part 5: Michael Palin 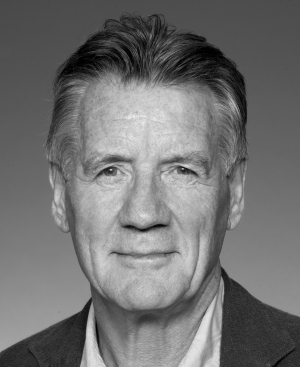 Out of all the comedy legends the up-and-coming John Cleese rubbed shoulders with in the late 1960s, there was none he found funnier than the far less well-known MICHAEL PALIN. In fact, Cleese’s desire to work with Palin was the core of what became Monty Python.

The youngest Python has remained eternally-youthful looking. He played most of the meek and mild characters on the Flying Cirucs — the shopkeepers, the accountants, the milkmen. Ones that were particularly hilarious when playing against Cleese’s towering monstrosities and other more grotesque characters, though he could also do a bit of grotesque himself (see Ken Shabby). He excelled at smarmy game-show hosts and sunny young optimists, like Reg Pither, the cheerful bicyclist of the only Python episode that told a single story all the way through, season three’s “Cycling Tour.” His overall aura of amiability has earned him, out of all six Pythons, the title of “The Nice One.”

And therein lies a problem. How am I going to rip one of the “nicest men in Britain” a new one over his crappy projects? I’m not, of course. Like his Python writing partner Terry Jones, Palin is not responsible for anything that can be considered truly wretched. He has maintained a high standard, so even his “Worst Project” below will merely receive a gentle “it wasn’t for me.”

He’s done a lot of stuff for British TV (documentaries on railroads and art history, and the teleplay for an autobiographical TV movie called East of Ipswich) that has received glowing reviews across the pond, but didn’t get much play stateside. In fact, one of his early projects with Jones, a six-episode mini-series called The Complete and Utter History of Britain (London Weekend Television, 1969), is almost entirely lost, as it was common practice among British TV networks to erase shows already broadcast in order to re-use the videotape. Very thrifty, but tons of classic stuff exists only in the memories of those who saw them the first time. Re-runs did not exist. By a stroke of cosmic luck, this policy ended at the BBC just a few weeks before Monty Python’s Flying Circus went into production. I shudder to imagine what almost happened.

None of the Pythons came to Flying Circus in mid-1969 as a TV rookie. Even at the tender age of 26, Palin had already hosted a pop music show (Now!, only broadcast in Wales — his first post-college gig), written for the esteemed Daily Show of his era (The Frost Report) and several other comedy/variety shows, co-created, co-wrote, and starred in a cutting-edge children’s show (Do Not Adjust Your Set) that adults loved as well (especially Cleese and Chapman), and was given free reign with kindred spirit and Chaucer expert T. Jones to write The Complete and Utter History…

The Complete and Utter History of Britain put Palin’s Oxford history degree and already-solid TV resume to good use by wondering what it would look like if television were around to cover all of British history. (Just reading about it in one of my Python books as a high-schooler inspired me to create a similar video project for history class — what if CNN covered World War One? The result shamelessly ripped off Python but also, I’m proud to say, had some original bits of anarchic comedy and also lots of factual info about WWI. Like The Complete and Utter History…its current status is “mostly lost.”) The Complete and Utter History… was a watershed moment for Jones and Palin, who chafed in small supporting parts and were dismayed to see their writing botched by actors and a director who just didn’t “get it.” Maintaining creative control by writing and performing became one of the underlying philosophies of Monty Python. The less-than-stellar result also led directly to the formation of the Python team. When the credits of last episode rolled, John Cleese, who had an open offer from the BBC to do a series, called up Palin and said bluntly, “I just saw Complete and Utter History. Since you obviously won’t be doing any more of those…let’s do something together.” The rest is history… END_OF_DOCUMENT_TOKEN_TO_BE_REPLACED