“Nothing Is Too Much Trouble”: A Chronology of Ian Fleming’s James Bond (Part 3)

Bond is rescued by a girl from a Japanese fishing village, but the bullet that grazed his skull damaged his prefrontal lobe, and he has lost all memory of his identity. For several months he lives as a fisherman on a small island off the coast of Japan. He takes the name Taro Todoroki. (YOLT)

The Secret Service pronounces Bond missing and presumed killed. His official obituary appears in the London Times. It is written by M, and gives a somewhat accurate overview of Bond’s life (though some dates are off by three or four years, see Appendix C.) (YOLT)

Bond begins having fragmentary flashbacks to his previous life. He is certain he had something to do with a place called “Russia.” He travels on a mail-boat to the Russian island of Sakhalin. (TMWGG)

Bond is picked up by Soviet police on the waterfront at Valdivostok. In a scuffle, he receives another blow on the head, and begins to vaguely recall who he is.

After discovering Bond’s true identity, the KGB interrogates him for weeks (learning nothing due to his partial amnesia), then sends him for brainwashing at “The Institute” in Leningrad. (TMWGG) 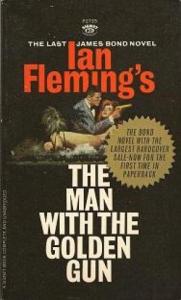 Due to a mind and psychological will left weak by the after-effects of amnesia, the KGB brainwashing is successful. Bond is sent by the KGB back to London to assassinate M. The assassination attempt fails, and Bond is put under the care of Sir James Molony, for what M calls “un-brainwashing.”

Bond’s rehab includes neurosurgery, followed by four weeks of intensive psychiatric rehabilitation at “The Park,” a discreet convalescent home in Kent. This is followed in turn by physical therapy and shooting practice. (TMWGG)

Bond receives first post-illness assignment, a seemingly impossible mission to test if his abilities have been fully restored: track down and eliminate Francisco “Pistols” Scaramanga, also known as the Man With the Golden Gun, the most dangerous hired assassin in the world. Scaramanga is currently employed by the Communist government of Cuba. If Bond successfully completes this mission, he will be reinstated to his previous status within Secret Service. (TMWGG)

Working undercover as “Mark Hazard,” a courier/security guard for Transworld Consortium, Bond tracks Scaramanga for six weeks through Mexico and the Caribbean, finally cornering him in Jamaica. He succeeds in eliminating Scaramanga, but receives serious gunshot wounds in the shoulder and stomach.

Felix Leiter and the CIA lend their assistance. (TMWGG)

After making the global intelligence community (including his own MI6) believe the assassaination attempt on M was delayed but successful, Bond is sent back to Russia to infiltrate Stalnaya Ruka (“Steel Hand”), the rogue group of former SMERSH leaders who brainwashed him. He foils their plot to assassinate Soviet premier Nikita Khrushchev. (WMTK)

On an unspecified assignment in the U.S. (Bond only refers to it as a “discourtesy visit.”) (CS)

Bond is in Hong Kong to assist with inserting another agent into China, but the mission goes awry. (CS)

M is kidnapped by terrorists in the employ of Colonel Sun Liang-Tan, of the Chinese People’s Liberation Army, who is planning an attack on a Middle East peace negotiation being held in Greece. (M is to be used in a bit of misdirection to make people think Britain is behind the attack.) Bond travels to Athens to prevent the attack, and succeeds, but not before being subjected to his most brutal torture session since the Casino Royale mission. (CS)

Bond reaches the age of mandatory retirement from the Double-0 section. It would appear this has been waived in his case, or perhaps the overall policy has been changed since it was first mentioned.

On a three-month sabbatical from the Service, Bond must decide whether or not to continue as a Double-0. He spends a month in Barbados (where he finally takes up tennis, after disdaining it his whole life), then travels along the Cote d’Azure in the south of France, before ending up in Rome. (DMC)

The sabbatical is cut short when he is summoned by M to investigate Dr. Julius Gorner, a pharmaceutical magnate suspected of illegal narcotics trafficking. Bond discovers that not only is Gorner a drug lord, he is also a terrorist planning an attack on the Soviet Union using a hijacked British airliner (to goad the Soviets into retaliating against Britain.) Bond’s mission to thwart Gorner’s plans takes him through Iran and into Russia. (DMC)

Bond celebrates his “45th” birthday alone at the Dorchester Hotel in London. (He’s really 49 — but the fiction that was concocted to shave four years off his age seems to have taken hold. See Appendix C.) END_OF_DOCUMENT_TOKEN_TO_BE_REPLACED

“Nothing Is Too Much Trouble”: A Chronology of Ian Fleming’s James Bond (Part 2) 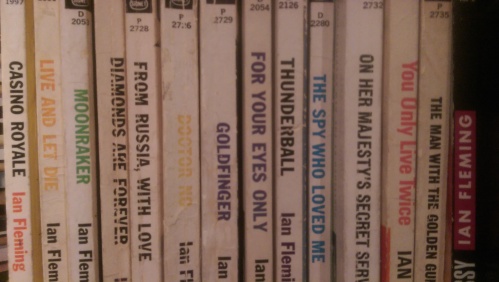 [NOTE: The events through 1945 are based primarily on John Pearson’s James Bond: The Authorized Biography of 007 unless otherwise noted, and may be altered or eliminated as more current canonical material on Bond is published. Based on references in the original Fleming novels, it seems Pearson placed some events from 1936 through early 1939 roughly a year, or even two years, too early, so I have made the adjustment to keep things in line with the original novels as much as feasible.]

Bond’s Swiss relations, the Delacroixs, arrange to move him to the University of Geneva, where he could live off-campus (supposedly “supervised” by a landlady, whom Bond found quite easy to charm and manipulate) and set his own schedule.

Bond attends lectures on psychology and law, and reads widely, but mostly does as he pleases, at times recklessly. He refers to the forthcoming year of his life as his era of les sensations fortes (“strong feelings.”)

After completing the intensely dangerous Aiguilli de Midi ski run, Bond gains a reputation as the “wildest skier in the university.” He also participates in bobsledding and mountain climbing that winter, taking particular delight in climbing under hazardous conditions — and climbing in the same area of the Aiguilles Rouges that claimed his parents. (OHMSS, FRWL, supported by AB)

It is probably also around this time that he begins doing some auto racing, in pursuit of the life-threatening thrill to which he is now addicted. (After he begins his Double-0 work in the post-war years, motoring in his rare and vintage Bentley racer is described as his “only personal hobby.” Although he still makes time for cards and golf, it’s clear that his car is his true passion.) (CR)

Bond travels to Paris for his Easter break, where he visits a brothel on his very first night — he is summarily de-flowered and has his wallet stolen at almost the same time. The brothel madam, Marthe de Brandt, recovers his wallet. De Brandt is nearing thirty years old, notorious, wealthy — and something of a freelance spy, mostly in the employ of Eastern European powers. (AB; supported by FYEO.)

Bond and de Brandt engage in a tempestuous affair, despite (or because of) their twelve-year age difference. The head of the British Secret Service in Paris, a man named Maddox, confronts Bond regarding de Brandt, explaining that she is the most likely the source that recently leaked information damaging to the English-French alliance…and has also been frequently and flagrantly unfaithful to him (he has the photos to prove it.) Driven by a cold, furious mix of patriotism and romantic hurt, Bond drives himself and de Brandt off an embankment into the Seine. She is killed instantly, he suffers a few broken bones and a concussion. (The crumpled Bentley remains in storage for the next thirteen years — and sometimes Bond recalls this as the incident that gave him his distinctive scar.) (AB; fate of the Bentley from FAAD.)

Maddox covers up Bond’s involvement, and establishes a mentoring relationship with him as he recuperates. Bond later discovers that de Brandt was probably not the source of the leaked information, and the pictures Maddox had shown Bond were from before her time with him. 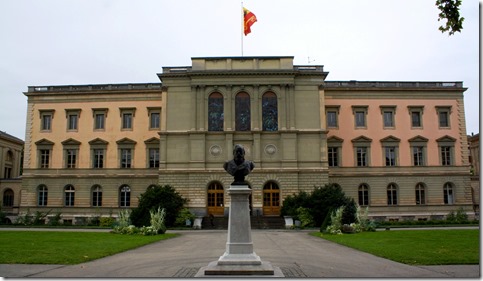 The University of Geneva

Maddox convinces Bond to work in an as-yet-undetermined capacity for the Ministry of Defence. (Maddox was surely aware that his Secret Service had been keeping tabs on Bond since 1934.)

Bond falsely adds two years to his age (to make him nineteen), provides a letter of recommendation from a cooperative former Vickers colleague of his father, and officially joins the Secret Service. He returns to London and is vetted by various medical, linguistic, and firearms experts at the Ministry of Defence. His probationary period for top secret intelligence work has begun. (YOLT; FRWL provides 1938 date)

Maddox suggests he continue as a student at the University of Geneva to provide himself cover.

He is attached to the Paris station, and begins doing routine courier and contact work through Europe, at times going as far as Moscow.

He vacations again at Kitzbuhel, Austria, skiing and climbing with Hannes Oberhauser.

Bond ends his time at the University of Geneva, and moves to Paris, where he can now concentrate on his intelligence career full-time, gradually gaining experience and building his skill-set. When not on assignment, he obsessively practices shooting, swimming, and unarmed combat.

END_OF_DOCUMENT_TOKEN_TO_BE_REPLACED

“Nothing Is Too Much Trouble”: A Chronology of Ian Fleming’s James Bond (Part 1)

A guy named John Griswold passed away at the end of May this year at the age of 65. He may not be a household name, but he is viewed with a great deal of reverence by fans of Ian Fleming’s James Bond novels.

Although a huge fan of the 007 film series, to me the “true” James Bond is the literary one, the one who spies, seduces, and kills in the pages of Fleming’s series of Cold War thrillers published between 1953 and 1966. The one who is a much more complicated and multi-faceted character than he is often given credit for.

defunct) websites dedicated to it, and in 2006, John Griswold published an entire book on the topic.

Griswold’s work was and remains invaluable, but there are a few theories and interpretations I disagree with, and a few things that Griswold doesn’t cover (mostly minor asides in the novels making brief mention of something that happened earlier.) Plus, the recent publication of a new series of officially-sanctioned “Young Bond” books — that Griswold, becoming lost in the cruel fog that is early-onset Alzheimer’s disease, never got a chance to read — sheds lots of light on the character’s formative years, and throws off Griswold’s findings by a couple of years. So I couldn’t resist taking a stab at it myself.

Or rather, returning to it.

The last time I read all of Fleming’s novels, one after the other, was eighteen years ago. Those were the last few weeks before my son was born, and it is also at that time I began taking notes on the chronology.  I clearly remember at the time thinking it was the final opportunity to do something that stupidly self-indulgent, before the responsibilities of parenthood curtailed my ability to sit and read an entire book series in one go. Now that the kid is going off to college, it’s a good time to dig out my old chronology notes and finish the project off properly. 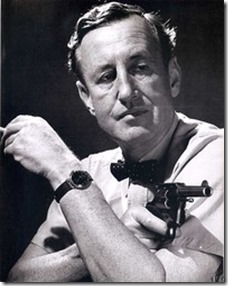 The Bond novel series of John Gardner (1981-96) and Raymond Benson (1997-2002), and a one-off by Jeffrey Deaver (2011), are quasi-reboots and place Bond in a modern timeline, so they won’t be part of this chronology. END_OF_DOCUMENT_TOKEN_TO_BE_REPLACED