The Holy Bee Recommends, #14: “Sinatra: The Chairman” (and to a lesser extent, “Frank: The Voice”) by James Kaplan

I have never been a huge fan of Frank Sinatra, but I certainly can’t deny he was one of the foremost musical artists of the 20th century. 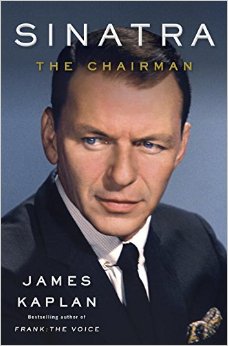 (I’m not a fan of ballet or musical theater either, but would never deny the skill and talent required to do them well.) I’ve tried to get into Sinatra, but for all the praise heaped on him for his “phenomenal phrasing” and his way of “living the emotion of a lyric,” my rock-raised ears can’t get around the fact that everything he’s done now sounds dated and hokey. It’s grandfather music. Or nowadays, great-grandfather music. It’s polite. Which makes it all the more wonder that it comes from perhaps one of the most impolite human beings that ever existed. Sinatra may have hated rock — and he did, with all the passion his passionate nature could muster — but in personality and demeanor, he was first rock star, maybe even the first punk (although to someone of Sinatra’s generation, “punk” was a grievous insult.)

The post-1954 Frank Sinatra as depicted by James Kaplan (and many others) is, more often than not, a generally unpleasant person. Thoughtless, hyper-sensitive, and supremely self-centered at the best of times, he often melted down into rages that were literally toddler-like: screaming, throwing things, breaking things, hitting people — because he didn’t get his way on some minor matter. When asked why those close to him tolerated it, they usually said something about his formidable charm and bottomless generosity when his mood was lighter…and of course that talent, and “that voice.” But for a reader like myself who isn’t a particular fan of “that voice,” his behavior is inexcusable. His story, however, is fascinating…

Sinatra: The Chairman is the just-published second of a two-volume biography by Kaplan, but the first, Frank: The Voice (2010), feels like nothing more than an extended prologue, chronicling the singer’s early years in Hoboken (as an indulged only child of a lower-middle class family, not the tough street gangster he claimed to be), his rise to fame as a skinny, bow-tied “crooner” singing with the big bands in the 1940s, and finally his temporary plunge into semi-obscurity. (Peter Guralnick’s two-volume Elvis Presley biography has the opposite issue; the first volume, Last Train To Memphis, is riveting, and the second, Careless Love, feels like a perfunctory denouement.)

Kaplan’s first volume lingers for its entire final third on those wilderness years of 1950-53 — dumped by Columbia Records and MGM, Sinatra limped through hosting a short-lived, low-rated variety show on CBS, sang to half-filled halls, and clung to fame primarily through his rocky marriage to rising star Ava Gardner. Frank: The Voice ends in early 1954 on a note of triumph — it’s Oscar night and Sinatra has just won Best Supporting Actor for From Here To Eternity (he had begged for the role when no one wanted to hire him.) The ink has just dried on his contract with Capitol Records, where his newly-matured voice and partnership with a number of gifted arrangers (Nelson Riddle foremost among them) put him at the forefront of American popular music.

This is where Sinatra: The Chairman begins, and rewards the reader for making the slog through Frank: The Voice. This is where we get the Sinatra we want to hear about — the Mafia ties, the brawls, the womanizing, the Rat Pack, the iconic Capitol albums, the dabbling in Kennedy-era politics…Kaplan does not disappoint. When I call the first volume a slog, that’s not a knock on Kaplan’s writing. In both books it’s wonderful, almost novelistic prose. What I mean is Sinatra’s early years, personally and professionally, are his least interesting. 1954 and beyond is where the real meat is.

Kaplan weaves Sinatra’s story in and out of a larger cultural picture. Like the first volume, a generous portion of Sinatra: The Chairman focuses on a few key years, in this case, 1960 to 1963, when Sinatra parked himself at an exciting and somewhat dangerous intersection of entertainment, organized crime (he was friends with Chicago mob boss Sam Giancana), and politics (he lobbied hard for JFK in the 1960 presidential campaign, and even partied with the Massachusetts senator several times early on, before Kennedy wisely began distancing himself.) Kaplan explains and intercuts all of these meticulously-researched threads without ever losing momentum, with a keen eye for the details he knows we want, and never becoming salacious or losing his academic tone. As we move through the 1960s, Kaplan also begins intercutting Sinatra’s story with the rise of the Beatles (by implication declaring them the other great musical phenomenon of the 20th century), and the rapidly-changing face of popular music in that decade. The sands once again shift beneath Sinatra’s feet as he ages out of any real relevance everywhere but Vegas showrooms and the cocktail parties of old Palm Springs millionaires. (Admittedly, it’s pretty cool that the marquees in Vegas would simply say “HE’S HERE” with no further information needed.)

Biographies sometimes find it difficult to strike a balance between telling the story of a life, and examining the work that life produced. They often either dwell on their subject’s psyche, or read like a chronological resume of projects. Kaplan does an excellent job interspersing Sinatra’s films and recordings into the overall picture, giving a good impression of what clicked and what didn’t, both with the artist himself (Sinatra did not care much for “Strangers In The Night,” and absolutely hated “My Way”), and with the public that paid for the results.

What of the legendary Rat Pack? It was mostly that — just a legend. Even the name was phony. The real “Rat Pack” was a loose-knit association of drinking buddies that revolved around Humphrey Bogart in the 1950s, which included David Niven, Judy Garland, agent Swifty Lazar, producer Sid Luft, and a few others, including Sinatra as a junior member. It faded away after the death of Bogart in 1957. When the original Ocean’s 11 began being location shooting at the Sands casino in January 1960, and its stars (Sinatra, Dean Martin, Sammy Davis Jr., Peter Lawford, and Joey Bishop) made headlines by filming during the day and putting on an increasingly raucous, boozy stage revue in the hotel’s Copa Room all night, some entertainment columnist dug the Rat Pack name out of his memory and applied it — incorrectly and unwanted — to the group tearing up Vegas that winter. Once the cameras stopped rolling on Ocean’s 11, the Rat Pack lived on mostly in people’s imaginations. The core trio of Sinatra, Martin, and Davis would get together for a few charity shows here and there, and did a couple of post-Ocean’s 11 movies notable only for their vapidity, but that was it. Somehow the notion of a group of wealthy, middle-aged tuxedo-clad singers behaving boorishly wormed its way into the public fancy and never really left. 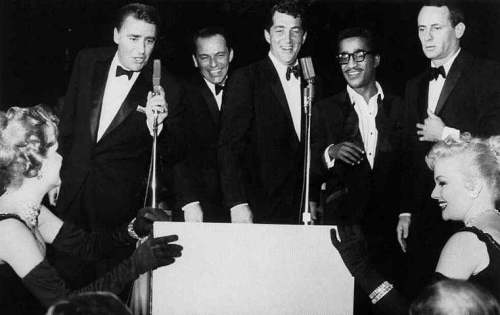 My lone quibble with the book is that it pretty much stops at Sinatra’s temporary 1971 retirement. After spending over 1600 pages on Sinatra across two volumes, the last quarter century of his life tears by in about thirty pages. Sure, he is no longer at his artistic peak, and fiery drama no longer dogs his every footstep, but there’s still so much to tell. His domineering mother’s death in a plane crash, the ill-fated Rat Pack reunion tour, his final marriage to Barbara Marx, by all accounts (except her own) a shallow, opportunistic gold-digger — all whiz by. No mention at all is made of his final film as a leading man (1980’s The First Deadly Sin), nor of his return to Capitol Records with the multi-platinum Duets (1993) and Duets II (1994). Hell, I would have even enjoyed hearing about his one afternoon doing a cameo in Cannonball Run II.

Yes, a little more insight into Sinatra’s sunset years would have been appreciated. Would that have made it a triple-volume biography? Perhaps, and perhaps quite a compelling one. (The Beatles are currently getting the triple-volume treatment by Mark Lewisohn.) But if you trim a little of the overwhelming detail from the 1950-53 period in volume one and push its ending to 1960, then trim a little from the 1960-63 period and add a little to the 1971-1998 period in volume two, you would still manage a great and much more comprehensive two-volume bio. 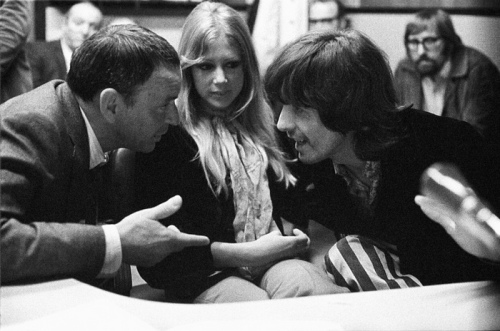 Sinatra being polite to George Harrison, probably through gritted teeth, 1968

One response to “The Holy Bee Recommends, #14: “Sinatra: The Chairman” (and to a lesser extent, “Frank: The Voice”) by James Kaplan”