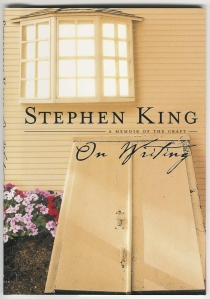 Stephen King…the name still conjures images of his 80’s heyday, when his novels about vampires, re-animated corpses, haunted hotels, and psycho killers defined horror fiction. His work took a broader turn beginning about twenty years ago, giving a subtler, more psychological twist to his grim terror tales, and also expanding far beyond the confines of the horror genre.

I am an unabashed fan of King’s work, but not for the reasons one would expect. Nothing that the printed word conveys can truly terrify me (this is the failing of my own imagination, not of King’s skill), so I read King for the clever twists and turns of his stories, and for his authorial voice — informal, highly descriptive, pop culture-savvy, and often laugh-out-loud funny.

2000’s non-fiction On Writing: A Memoir of the Craft may be my favorite King book of all time, if we’re judging by how many times something is re-read. It’s under 300 pages, and divided into three parts. First is a (very) brief autobiography, focusing on the experiences that shaped him as a writer. Second is his thoughts on the craft of writing, suggestions and tips for novice writers, and the techniques that work for him. (Some of Part Two is an endorsement/re-statement of the seminal work by Strunk & White called The Elements of Style, which also graces the Holy Bee’s bookshelf.) Third is a graphic, squirm-inducing account of the near-fatal 1999 road accident that crippled him, his painful rehabilitation, and the role writing played in his recovery. Life is not a support system for your art, King says. It’s the other way around.

No matter if your audience is six (hi, guys!) or six million, writing is an enormously gratifying act of creation. Where before there was nothing, now there is something. Even if it is just ramblings about your iPod playlists. An oil painter or woodworker, I’m sure, feels a similar satisfaction, but they’re working with tangible raw materials. A writer’s raw materials are his or her thoughts, conjured up out of the ether, marshaled and organized, then expressed as eloquently and precisely as possible to provoke some kind of emotional or intellectual reaction from an unknown person, who could be thousands of miles away and/or centuries in the future. King compares it to telepathy, and believes it is the one true act of magic that exists in the real world.

Not that I’m saying writing is a “better” skill than painting or woodworking….OK, I kind of am. Deal with it.

I have re-read this book many, many times in the decade since its publication. What bits of advice does the Holy Bee try to bring to bear on his humble web log?

2. Avoid the passive voice. Doesn’t “The hangman pulled the lever” sound so much better than “The lever was pulled by the hangman”? This kind of writing crops up all over the place. It will not be used by the Holy Bee. Oops, I mean, the Holy Bee will not use it.

3. Avoid using too many adverbs. If you’re writing is clear and specific enough, you won’t need that many of them. This is advice I’m always mindful of, but regularly (see?) fail to follow. Adverbs are just so user-friendly! My prose will continue to be littered with words ending in “-ly” until the end of time, but I do try to watch it. For every adverb you read, I’ve rejected two. In fact, I almost wrote “probably continue to be littered” two sentences ago.

4. Be honest. This can be applied broadly. Don’t pander to or second-guess your audience. “If you expect to succeed as a writer,” King says, “rudeness should be the second-to-least of your concerns. The least of all is polite society and what it expects. If you intend to write as truthfully as a you can, your days as a member of polite society are numbered, anyway.” Don’t second-guess yourself, either. If you’re struggling to choose the proper word, the first one that comes to mind is usually going to be the best one. Trust your gut, and if on reflection it really doesn’t work, that’s what second drafts are for. “Honesty” does not always mean “factual accuracy,” as any good fantasy writer will tell you. In writing, it means emotional truth. In my autobiographical essays, I sometimes expand/compress/fudge chronology or facts to improve readability (and no autobiographical writer can avoid this, like it or not), but my aim is always to stay true to my emotions and reactions to what I was going through at the time.

Those lessons I can easily apply to the swill you read here. King’s other advice — on character, dialogue, and his preference for “story” (flowing & natural) over “plot” (stiff & artificial) — apply more to fiction writing. My last attempt at fiction writing was about seven or eight years ago, when I got the idea for a ghost story set in the trenches of World War I. I still think it’s a good idea, but two or three pages into it, I realized I didn’t have the literary flair (or discipline) to pull it off.

Another enjoyable part of the book is King’s description of his own writing method. He prefers writing in the morning, alone in his writing room at a desk facing the wall, with loud music blaring. Although constant pop-culture jokes are made about King’s frenzied, prolific output, he says his writing goal is ten pages (about 2000 words) per day, every day. Disciplined, yes. Superhuman, no. Because he enjoys the process so much, it rarely feels like “work.” King says a book should take about the length of a season — three months or so — to complete, otherwise it will grow stale in the writer’s mind.

The Holy Bee is not blessed with a “writing room,” nor the time to crank out 2000 words a day in one if he had one. I try to get about 2500-3000 words per essay at a rate of an essay per month. Here’s how a Holy Bee piece comes together:

My writing process often begins when an opinion or idea starts rattling around in my head like a BB in a tuna fish can (to borrow a simile from Dave Barry), and refuses to go away. This usually occurs when I’m in my back patio chair trying to read. Or in the shower (the Holy Bee is very clean.) After awhile, I will grab my yellow legal pad (contained in its battered blue imitation-leather cover) and a green Paper Mate felt tip pen, and get to work.

When it comes this way, white-hot and burning a hole in my cerebral cortex, often 80% of the complete blog essay ends up right there on the paper — but totally out-of-sequence, as new points to make occur to me. I have to work fast, because I often envision a specific way of wording something, and I need to to get it down before I forget. I’ve forgotten before, and it puts me in a bad mood for several days. Tons of asterisks, arrows, and margin notes help me piece it together when it comes to second-draft typing time. 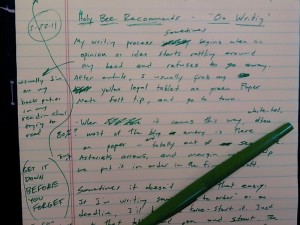 Sometimes it doesn’t come that easy. If I’m writing something “to order” or on a deadline, I’ll have to force-start it. Just grab that tablet and pen and start. Even if it’s complete gibberish. The important thing is to start the physical act of writing. It will be the most boring, inane drivel for a paragraph or two. But I’ve learned if I make a start, the pump gets primed, the good stuff starts flowing, and I’ll go ahead and make the switch to Google Docs, then edit via Windows Live Writer. I can always re-write or eliminate those opening segments at this point. Once it’s transferred to the actual WordPress site in Draft form, I re-read it about a dozen times, fixing errors (a few seem to always slip through), tweaking the wording, adding or subtracting a sentence or two. Then I hit “post,” announce the latest entry to the world via Facebook, and await the plaudits from my grateful readers.

Most of the “Playground” entries have started with a simple list of six to ten songs from the era I’m conjuring up, a couple of bullet-pointed notes, and one or two paragraphs of stilted, uninteresting longhand. Out of the corner of my eye right now I can see the skeletal, embryonic outline of “This Used To Be My Playground #17,” still laying on the slab, inert, waiting for my muse to sprinkle her fairy dust on it and bring it to life.

According to my notes, the space and title for this “On Writing” essay were reserved on my dashboard on May 2. The actual act of writing began on May 22. I’m typing these final words on July 12. In between those dates, work and family boorishly intruded like a gang of Capital One vikings. Over two months between spark and fire. So it goes. I will be backdating this entry to June 1, to preserve the lie that I update my blog every month. Who says the Holy Bee doesn’t do fiction?

(Should I remove the adverb “boorishly” from that last paragraph? Just can’t seem to. And you can get my annoying parenthetical asides when you pry them from my cold, dead hands.)

ED. NOTE — 9 Years Later — I’m re-reading this and chuckling at how elaborate my old process was. Nowadays, I skip longhand and do all of my drafting straight onto Google Docs. Bypassing the needless step of Live Writer, I then copy & paste straight to WordPress. Also, my essay length has blown up to 5000 words. And instead of backdating late pieces, I preserve the “one essay a month” fiction by writing furiously all summer (the opposite of when I used to write), stockpiling almost a year’s worth of stuff in advance. And I no longer announce anything via that dumpster fire that Facebook has become.

Tagged as on writing, stephen king