The Holy Bee Recommends, #6: "Marry him, murder him, do what you like with him."*

I freely confess that I am a library junkie. I realize that this puts me in a category with lonely spinsters and elderly men who can only read a newspaper if it’s threaded through a wooden baton, but it got its claws into me early. 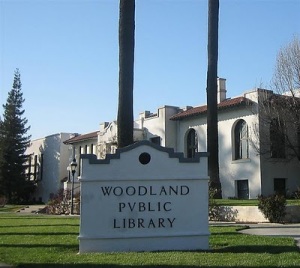 1985? 1986? I know I was barely into the double digits in age when I forsook the beanbag chairs and Betsy Byars books in the children’s section in the basement of the old Woodland Public Library for the adult section upstairs, with its musty-smelling stacks and high-arched windows. And the fireplace! On cold winter days, there was always a blazing fire in the periodicals section (in the fireplace, not actually amongst the periodicals, which would have been quite alarming), and those high-arched, iron-banded windows seemed made to have rain spattered against them. It always seemed to be raining on days I visited the library.

The Woodland Library was one of the hundreds of libraries all across the U.S. founded in the early 1900s through a grant by original gazillionaire Andrew Carnegie, when he wasn’t busy betting entire Pennsylvania towns in poker games against Rockefeller, or lighting cigars with fistfuls of cash. (For those of you who don’t know, Carnegie was born dirt-poor in Scotland, basically invented the U.S. steel industry from scratch, then spent the last twenty years of his life literally giving his fortune away to worthy public institutions and charities. What did you do today?)

I remember sitting and reading things for hours, hunched over until my back ached on those little wheeled stools in the aisles. I used my dog-eared library card (with my address neatly typed on it) to check out my first grown-up books – the original Beatles biography by Hunter Davies (the first book I read with the word “fuck” right in it. Wow! What a start! Eat that, Betsy Byars!), the autobiography Harpo Speaks by Harpo Marx…and The Adventures of Sherlock Holmes by Arthur Conan Doyle, which was recommended to me by my fifth-grade teacher.

The checking-out process did not include a laser scanned over a bar code. It was a rubber stamp (attached backward to a pencil) that applied a date two weeks in the future to a card that was then filed in the mysterious library archives. If I was horribly irresponsible and missed my due date, the librarians always knew, and I was fined a nickel. It was a pretty good system. The library habit was cemented in college, where I certainly spent more time in the library than the classroom, earning the history degree that’s garnered me enormous amounts of material wealth thus far. The Woodland Library underwent an enormous renovation in 1988, and lost a lot of its character. It’s still a library, so I still love it and make a lot of trips back there even though I live in Sacramento, twenty miles away. Sadly, on those rainy winter days, the fireplace is still there, but is now ignored and cold. 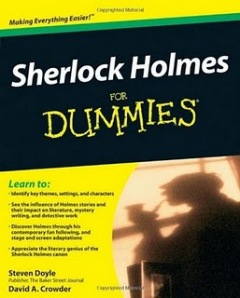 A fireplace is almost an even trade for the modern library system. The greater Sacramento area has twenty-three libraries, and I’ve been to about twenty of them. A book checked out in one branch location can be returned to any of the others. The full catalog for all locations is online, and with the click of a mouse, a book in a library across town will be transported by some underpaid public employee to the branch down the block from my house within a few days. Or, if I’m too impatient, I pay a visit to a far-flung library and nose around. I usually look for books on my pet subjects (general history, pop culture), but best of all is when a single book on a random topic caught out of the corner of my eye jumps out at me and sends me deep down the rabbit hole of a certain area of study that will consume me for the next several weeks (serial killers, Old Testament history, Celtic mythology, Antarctic exploration, Shakespeare analysis, etc.)

Getting back to Doyle’s Sherlock Holmes tales, let it be known that my three-volume set of the annotated Holmes short stories and novels is one of my prized possessions (and weighs as much as an eastern European compact car), and that my purpose here is not to extol the virtues of Doyle’s work, which has been done repeatedly by writers much more esteemed than myself. No, what I want to do here is talk about pastiche – a literary (or dramatic, or musical) piece of work created in direct imitation of, or homage to, an original. During one of my recent random wanderings down a library aisle, I spotted Sherlock Holmes For Dummies by Steven Doyle (no relation) and David A. Crowder. It dedicated an entire chapter to the hundreds of Holmes pastiches written over the years. I tracked down a few of them. Here’s the two I read recently:
Dust And Shadow by Lyndsay Faye 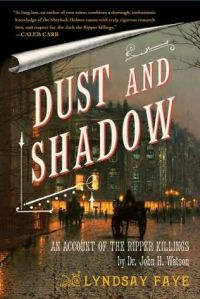 The general conceit of the original Holmes stories is that they were first-person reminiscences written by Holmes’ associate and friend Dr. John H. Watson. Most pastiches are written in the same manner, often purporting to be one of Watson’s “lost manuscripts.” This is one of them, and Faye captures Watson’s (or, rather, Doyle’s) prose style perfectly. It starts, a la Indiana Jones, in the midst of an earlier adventure, and then settles in to a story on a subject that Holmes pastiche-ers find hard to resist: The Victorian era’s greatest detective versus the Victorian era’s greatest criminal: Jack The Ripper. Both the fictional Holmes and the all-too-real Ripper did their work in 1880’s London, and it was inevitable that they should meet. (Pastiches have also brought Holmes up against that other great Victorian baddie, Count Dracula, but the less said about them the better.)
Much like Harrison Ford growing to despise Han Solo (and suggesting that he die at the end of Jedi), or Paul Sheldon wearying of Misery Chastain and killing her off, Arthur Conan Doyle himself was never very fond of his most beloved creation. When an American actor/playwright asked Doyle if he could make some changes in the character for a play he was writing, Doyle responded in so many words that he didn’t give a rat’s ass*.
The labyrinthine mysteries and clever solutions that make the stories such great reads were part of the problem. Doyle frequently complained that they were just damned hard to write, and each short story took as much effort as a novel. Plus, he wanted to move on to other literary endeavors. So he attempted to craft a heroic end to Holmes’ life in the story “The Final Problem.” Annie Wilkes-like public outcry (including Doyle’s most loyal reader, his mother) forced Doyle to resurrect him a couple of years later, with a glib Holmes explanation of how he faked his own death in an elaborate subterfuge, and spent the intervening years traveling incognito through the Far East. The Holmes adventures then continued without missing a beat.

The Shadow of Reichenbach Falls by John R. King

This one tells the story of Holmes’ “missing years,” and includes another, lesser-known fictional detective, Thomas Carnacki, created by author William Hope Hodgson in 1910 as a kind of Sherlock Holmes knock-off – but one who specializes in paranormal phenomena. King alternates first-person narrators (primarily Carnacki and an amnesiac Holmes), and includes some spooky supernatural elements that manage not to ruin the whole thing. Tough to pull off, because despite Doyle’s belief in spiritualism and even the existence of fairies, his Holmes stories epitomize down-to-earth, logical skepticism. It doesn’t pack nearly the wallop that Dust And Shadow does, but it’s a fresh approach, and about as original as something meant to be unoriginal can be.

Unread or briefly skimmed by me, but also good possibilities:

The Seven Per-Cent Solution by Nicholas Meyer, published in 1974, kicked off the modern era of Holmes pastiches, and inspired two sequels and a film.
The Italian Secretary by Caleb Carr (author of the excellent Victorian-era mysteries The Alienist and The Angel of Darkness.)
Sherlock Holmes: The Missing Years by Jamyang Norbu is another look at the mysterious era between Holmes’ “death” and resurrection. A Tibetan named Huree acts the Watsonian assistant/narrator and tells of Holmes rendering assistance to the Thirteenth Dalai Lama.
A minor Holmes character, grifter and con-artist Irene Adler (the closest the asexual Holmes has come to a romantic interest), has been given her own series of novels by Carole Nelson Douglas. (I skimmed the Irene Adler novel Chapel Noir, which also deals with Jack the Ripper, and it seemed pretty good. Other Holmes vs. Ripper tales are the third-person The Whitechapel Horrors by Edward B. Hanna and Watson-narratedThe Last Sherlock Holmes Story by Michael Dibdin, which I plan on reading soon. Probably should have waited until after I read it to write this blog entry, but the Internet is a harsh mistress, hungry for content.)

Another series featuring a female protagonist is the “Mary Russell” series by Laurie R. King, in which the heroine receives counsel and training from the aging, retired Sherlock Holmes. The Beekeeper’s Apprentice is the first in a series of eleven (so far) novels.

The most well-known Holmes pastiche these days is the 2009 Guy Ritchie film Sherlock Holmes. Stuffy Doyle purists got on their high horses and sniffed disdainfully at turning their beloved stories into a loud, big-budget, effects-heavy action film where stuff blowed up real good, and having the great detective himself played by the American Robert Downey, Jr., who bore absolutely no resemblance to the literary Holmes. I actually liked it quite a bit – and if you read the original stories carefully, there’s all kind of references to wild action that Holmes takes part in when not witnessed by faithful biographer Watson. So all the more outlandish stuff merely alluded to in the stories is placed front and center in the film – and cranked up to 11. Although he’s not tall, gaunt, and aquiline in the way Holmes is described by Doyle, Downey is a good enough actor to allow suspension of disbelief for two hours. And even purists praised Jude Law’s note-perfect portrayal of Watson. 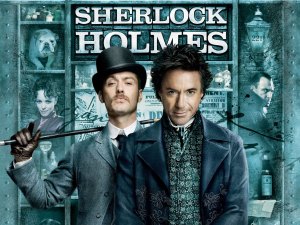 All of this brought to you by glimpsing the eye-catching yellow spine of Sherlock Holmes For Dummies while looking for something else. I love it when that happens.

One response to “The Holy Bee Recommends, #6: "Marry him, murder him, do what you like with him."*”