Reading the excellent recent book, You Never Give Me Your Money: The Beatles After The Break-Up by Peter Doggett, and the upcoming ninth anniversary of his death, got me to thinking about the Beatles’ “third man.”

Six long years before the worldwide cultural phenomenon known as “The Beatles” exploded onto the scene, there were the three individuals that banded together to form its core. History and fate chose two to put on the Mount Rushmore of Great 20th Century Popular Composers. The third, for various reasons, was shut out — absorbing all the pressure, dealing with the all the chaos, but receiving far less reward, materially and spiritually.

George Harrison had been teamed with John Lennon and Paul McCartney since the days of their acoustic skiffle band (“The Quarrymen”) in 1958. By 1961 (at the urging of new manager Brian Epstein), he handled his share — a full one-third — of the lead vocal chores right along with his slightly older cohorts. They were a triple-frontman threat. The Star Club live tapes and Decca 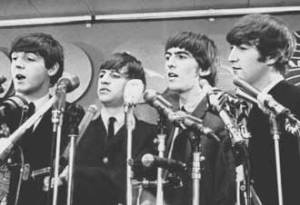 audition recordings bear this out. But when they got a recording contract in the summer of ’62, the pop music business of that era was focused on star vocalists and their anonymous backing bands. Beatles’ producer George Martin thought he was being quite groundbreaking for allowing the Beatles to have two star vocalists. That was totally unprecedented, and there simply wasn’t room for George to have the spotlight as much as he did in the smoky basement clubs of ’61. His super-thick “Scouse” accent and lack of songwriting chops sealed his exile from the front line. (The songwriting would come in time. The accent never went away, but once the music world became enamored of all things British, it ceased to matter.)

George was just as opinionated and articulate as the others, but a ferociously ill-timed flu bug on the eve of their first U.S. visit may have cemented his reputation in the popular consciousness. He was fighting a fever and sore throat during the Beatles’ very first American press conference at Kennedy Airport in February 1964 — a few moments that introduced the Fab Four to the world beyond the British ballroom circuit. The news media then as now needed everything reduced to a soundbite, so while the others clowned and mugged, he blearily hung back ever so slightly, and earned the sobriquet “The Quiet One.” Really, he was just trying not to vomit on the microphone bank. By the time they reached the Plaza Hotel in Manhattan that afternoon, he was bedridden.

A Central Park photo session (above) and Ed Sullivan Show rehearsals proceeded without him the next day. Roadie Neil Aspinall stood in for him during camera blocking, and Sullivan threatened to “put on a wig” and join the band himself if Harrison didn’t show for the all-important broadcast. A day’s rest and a quick vitamin B shot allowed the Beatles’ lead guitarist to make that iconic TV appearance for an audience of 70 million.

Let’s not forget that Harrison was the Beatles’ lead guitarist. From the countrified Carl Perkins–

inspired rockabilly of his early solos to his fluid, almost Hawaiian-sounding slide parts in the later years, Harrison’s playing has always been distinctive. Just listen to the murky twangs under the wash of cymbals and hand-claps in “I Want To Hold Your Hand” or the descending series of jangly notes in “Help!” that were the envy of the Byrds and launched a thousand R.E.Ms in the following decades. If someone in a band asks their guitarist for a “George Harrison-style solo,” that guitarist will know just what is needed. (Speaking of the Cars, check out “My Best Friend’s Girl” for an early-George-style guitar solo, or Badfinger’s “Day After Day” for a late-George-style guitar solo.)

After the end came for the drained, exhausted band in late 1969, all of the Beatles were angry at each other for those first few years apart. One only has to read Lennon’s vitriolic, epic interview in the Jan. ’71 issue of Rolling Stone to see that. Lennon later retracted some of the nastier comments, claiming he was just venting while “stoned out of my fucking mind.” But George seemed to cling to some of those negative feelings toward his old companions — and the toll that “Beatlemania” took on him. If not really the Quiet One, George seemed to be the most Embittered One. 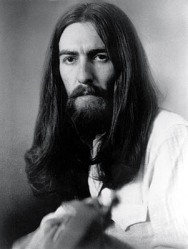 Maybe it was the “invisible man” syndrome – not getting his due. Lennon-McCartney may have got the lion’s share of official songwriting credits, but session tapes reveal George’s contributions to the arrangements of dozens of Beatles classics were noteworthy. (Even McCartney said – much later – “George did a hell of a lot more than stand there with a pick in his hand waiting for the solo.” George Martin lamented – also much later – that George’s skills were very underutilized. Martin didn’t have the time for a genius when he was dealing with two super-geniuses.) Even his own songs don’t always get proper credit. Frank Sinatra repeatedly referred to “Something” as the greatest love song of the 20th century – and then just as repeatedly credited it to Lennon-McCartney.

Or it could be that his consuming interest in Eastern spirituality that began on the set of the Beatles’ second movie Help! in 1965 and continued for the rest of his life caused him to be the most suspicious and critical of shallow rock music “fame.” (“I [lost] interest in being ‘fab’ at that point,” he remarked.) In his gloomy interpretation of Krishnaism, everything in the “material” world was found severely wanting.

Or his natural solitary and private nature could not cope with living in a fishbowl, and he was the most likely to lash out and respond negatively. I don’t think his first credited solo composition for The Beatles was called “Don’t Bother Me” for nothing. Even the notoriously testy Lennon strolling in Central Park the late 70’s (as seen in the documentary Imagine: John Lennon) responded to some clueless New York mook yelling “Hey, when are da Beatles gettin’ back together?” with a cheery “Tomorrow!” as he continued his walk.

As far back as ’64, George took no shit from nosy photographers.

At first, Harrison was actually the most commercially and artistically successful of the solo Beatles, with his highly-regarded triple (!)* solo album All Things Must Pass in 1970, and his organizing and headlining the first major, all-star charity concert for the famine victims in Bangladesh in 1971.

But then he seemed to lose interest. He grudgingly put out albums because that’s what was expected of him, but the decade-long downward skid from 1973’s dour-but-still-melodic Living In The Material World to 1982’s disastrous Gone Troppo, audibly illustrated Harrison’s increasing detachment. When he decided to quit music in

order to focus on running his film company, HandMade Films, no one was surprised…or disappointed, really. It seemed like there might be a comeback in the cards when he came out of semi-retirement in 1987 with the charming Cloud Nine album (which produced the final #1 single by a Beatle, “Got My Mind Set On You”), and he seemed to have fun recording with the Traveling Wilburys super-group the following year. Then…

Then…nothing. A descent into paranoid reclusiveness. A blink-and-you’ll-miss-it round of concerts in Japan in 1991, organized by his friend Eric Clapton, who hoped to revive Harrison’s interest in live performing. (It didn’t work. Harrison was miserable throughout.) A series of tired interviews and a two “new” Beatles recordings for their Anthology project in the mid-90’s. (It was revealed in Doggett’s book that Harrison did it purely for the money. The implosion of HandMade Films nearly bankrupted him.)

Minor news items appeared in the late 90’s mentioning his fight with cancer. It kept coming

back. Throat cancer. Lung cancer. Brain cancer. Experimental treatments in Switzerland and the Mayo Clinic. The terrifying assault by a burglar in late 1999 that sapped the last of his strength. (All that paranoia now seemed to be justified.) Finally, in the cherished privacy provided by a nondescript rented house in L.A., the end came in November 2001. A posthumous album, Brainwashed, made up of tracks he had been tinkering with for the past decade in his home studio, was not the unifying Grand Summation that we had hoped for. It was quickly forgotten, and the Quiet was now permanent.

One hopes he loosened up a little behind closed doors, and it does seem likely. In the home videos taken of the Wilburys rehearsals, he seems happy and relaxed. His devotion to and friendship with the Monty Python group (HandMade Films was created in order to produce their Life Of Brian movie) indicates the sharp Liverpudlian sense of humor was still there — but kept under wraps.

His son, Dhani, was one of the designers of the Beatles Rock Band video game, and made the publicity rounds a year or so back promoting it. He displayed an easy grace and affability that probably characterized his legendary father when he was in the cocoon of home and family. It was chill-inducing how much Dhani seemed to be a physical carbon-copy of George. When he showed up on The Tonight Show to play the game with Conan, it looked as if the line drawing on the cover of Revolver had come to life. (Of course, at 32, Dhani is now several years older than his father was when the Beatles split. The Beatles finished their career before George’s 27th birthday.)

The Holy Bee, bookworm that he is, is still waiting for the definitive Harrison biography to emerge. British musician-turned-music journalist Alan Clayson wrote a mediocre one (titled, naturally, The Quiet One) as part of his quadruple biography set on all four band members. (His Ringo bio, Straight Man Or Joker?, was pretty wretched.) And I recently tried to make it through one error-ridden piece of hackwork called Behind Sad Eyes that was downright unreadable. (Check out the Amazon reviews on that shit-pile. I’m not alone in my opinion…) George’s 1980 autobiography, I Me Mine, is, of course, totally unrevealing — mainly a self-examination of his song lyrics, and some scanty reminiscences with co-author (and longtime Beatle mouthpiece) Derek Taylor.

In the end, it seems that the juggernaut known as “Beatles” simply wrung one person dry.

“You gave your money and your screams. We gave our nervous systems.” – G.H.

*The third disc in the “triple” album was actually a set of incredibly tedious instrumental “jams” typical of the early 70s. Far-out, man.

And, finally, check out George’s solo scene in A Hard Day’s Night

4 responses to “The Quiet One?”