[NOTE: This piece was ported over from a much-older website, and some of the formatting and photo sizes aren’t presented as originally intended. As soon as I hire a quality control staff, these errors will be corrected.]

At long last, the conclusion of this little historical photo essay. Some of the pictures I originally took last summer to illustrate “Marysville Now” are already edging out of date! If you have a moment (and if you’re already reading this, I suspect you have several) catch up with Part One, Part Two, and Part Three. Here we go… 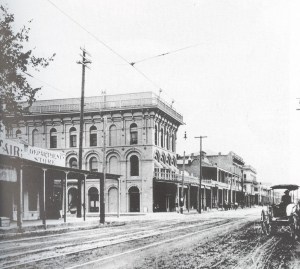 The Marysville Water Company had enormously thick walls on its first floor to support the reservoir on its roof. 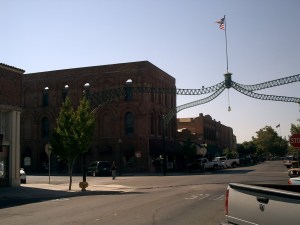 The old water company building is now home to Marysville Music on its first floor, but its second floor is vacant, and its third floor is a roofless shell.

Man alive, who doesn’t love a good piece of candy? Well, me for one. I prefer a saltier snack — your potato chip, your pretzel, your cashew or other fancy nut. With my lack of willpower as regards snacks, this preference is probably the only reason I have a tooth left in my head. However, other people’s love of candy has made the Candy Box/Little Farmhouse confectionary store a Marysville landmark.

In its old location is now a realty office, which kept the same White Stripes-esque color scheme of red, white, and black. But never fear, chocoholics and fellow fat-asses! The Candy Box has merely relocated across the street and down one block.

Desperate housewives, indeed. Here we see a gaggle of June Cleavers, freshly out from under the dryers and curlers, queuing for the opening of Jay’s department store on D Street. Clearly, the hipster couple in the passing convertible have no need of such domestic fripperies in their squalid beatnik pad. 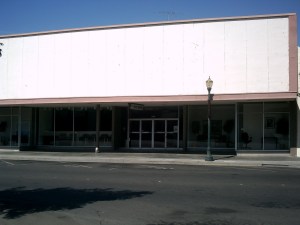 Much like its fellow Jay (as in Leno), this Jay’s is now a soulless, hollowed-out husk, knowing that greatness was once in its grasp. You want a deal on quality used office furniture? This is the address you’d come to these days. The lamppost still holds a lonely vigil out front, remembering the glories of days past.

No, it’s not the opening of the latest Doris Day movie, nor is Johnnie Ray making a live appearance. Jesus, did people have nothing better to do back then? Here we see another drab, gray slice of pre-Internet, pre-HDTV life as people turn out in droves for another grand opening of a store, this time for Yuba Market. I’ve heard tell that the riot squad was called in to subdue hausfraus clubbing each other like baby seals over 19-cent Birds Eye frozen peas. Thought for the day: Most of the people you see in the picture are probably dead by now. 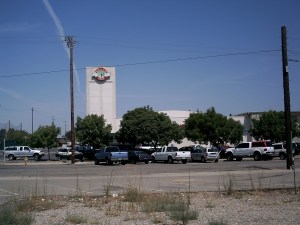 You don’t get those kind of numbers for the opening of a Dollar Tree, which is what the Yuba Market ultimately became.

The building still stands, but I couldn’t tell you what occupies it for all the tea in China.

The Furniture Center had some pretensions of snazziness, what with its trendy art-deco lettering and fancy tile frontage. (The old Candy Box store is visible two doors to the left.)

Despite its name, something went horribly awry with its eventual replacement, “Posh Decor.” Art-deco and bathroom-style tile are clearly far too gauche for Posh Decor, but they may have gone too far the other way. I can’t think of a blander, duller storefront in a four-block radius. (Maybe Jay’s.) Dumb name for a store, anyway. Would you eat at a restaurant called “Delicious Food”?

God knows why this particular photo was taken of a small upstairs window on a non-descript store, but it was included in the Images of America: Marysville book, so I’ve reproduced it here. Owner Eva Bradley is referred to in the book as “Marysville’s first female entrepreneur,” so enormous, ugly flowered hats off to her, I guess. 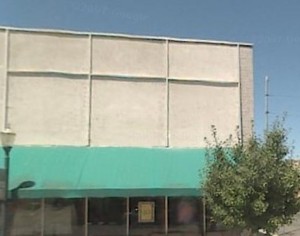 A shot of the same building from roughly the same angle. I’m sure Eva Bradley would be proud to know that this building spent a good part of the 90’s as a meat-market sports bar called Rugby’s, the Start square on the “Date Rape” board game. I’ve spent a few evenings nursing Scotches in a corner booth, observing spiky-haired guys in backwards, upside-down visors and flip-flops ply pony-tailed aspiring dental hygienists with neon-colored “shooters” in three-foot tall cocktail glasses. Approximately 6000 tear-stained searches for panties on a strange bedroom floor later, it’s a used furniture store. So it goes.

Replaced by a parking lot

No gas station ever has a name as cool as “Bud & Roy’s” anymore.

Home Dairy Time eventually struck “shit out of luck” for Bud and long-time companion Roy, and their service station was radically reconfigured into Putman’s, a store I know nothing about, but from squinting at the picture, they appear to sell nothing but random fragile knick-knacks. 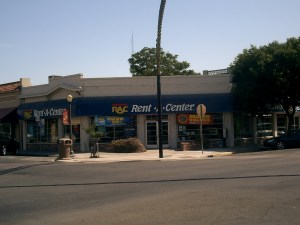 After a short stint as a bookstore (and there’s a business with a limited shelf-life — a bookstore in the Yuba-Sutter area — we couldn’t even support a closet-sized B. Dalton’s in the mall), the old Putman’s building became a Rent-A-Center, a business model much more suited to the area. Meanwhile, the Chicken Soup books continue to fly off the shelves at the local Wal Mart.

Crowds gather around the storefront of J.C. Harris Hardware (specializing in the newfangled technology of radio) to hear a radio broadcast of the 1925 World Series, in which the Pittsburgh Pirates took the defending champion Washington Senators in seven games. 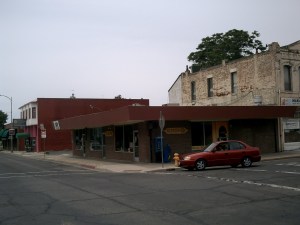 J.C. Harris was defunct by 1950, and the building went down not long after that. Occupying the lot these days is Cisco’s, the best Mexican cafe in a town with no shortage of Mexican cafes.

When the magic combination of donuts and hamburgers eventually came up short for restauranteur Herb Metcalf, he moved his oil-based operation across the river to Yuba City and opened Metcalf’s Donuts & Chicken. It was the site of my first date in October 1989, and both the donuts and the chicken were surprisingly tasty. 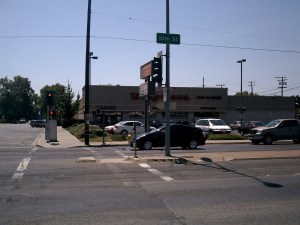 By the time Donuts & Chicken was going strong, Herb’s original Marysville location was long-gone, razed for a Walgreen’s parking lot. Sadly, Donuts & Chicken also went to the Great Grease Trap in the Sky in the early 90’s. 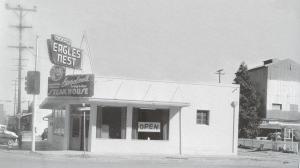 The Eagle’s Nest was both a favorite of Marysville locals, and a landmark for those passing through. As a child, before I lived in the area, this was where we stopped for breakfast as we made our way to camping or fishing up Highway 20.

After sitting vacant for awhile in the early 2000s, the building re-opened under new ownership as “Gary’s Place.” Tempting as it has been to sample, I can’t shake the irrational subconscious notion that this place is somehow connected to the fictional “Gary’s Old Town Tavern” in Boston, mortal enemy of the beloved Cheers gang.

The Wagner building hosted a common arrangement from the mid-1900’s — cheap rooms available at the St. George Hotel above a greasy spoon. 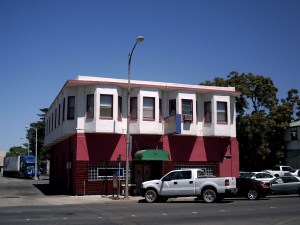 The Wagner building apparently failed to duck, and it’s top floor was sheared off in some bizarre accident. The ground floor is now occupied by the China Moon restaurant.

Yet another casualty of the downtown “redevelopment” of Marysville in the late 1970’s, the Republic Hotel building also hosted the popular Lotus Inn restaurant, owned by Bing Ong, a leader of the large local Chinese-American community.

The Lotus Inn and Republic Hotel were replaced by the butt-ugly strip-mall known as the “Downtown Plaza,” which seems to have always been mostly vacant. 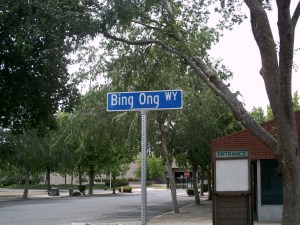 Bing was thrown a posthumous bone by the Marysville City Council, who saw fit to name a narrow, forty-foot alley dead-ending in a parking lot after him. 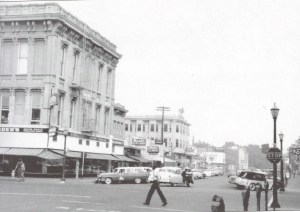 The Independent Order of Oddfellows building on 3rd and D. The Wagner building is also visible to the right. Looks like the old J.C. Harris building is already gone. I’ve often wondered what these “lodge” types do that requires an ornate three-story fortress. You need three goddamn stories to play bingo and host rummage sales and brunches? (The old Elks building in downtown Sacramento is something like twenty stories high. Seriously, is anyone keeping an eye on these people?)

The Oddfellows must have finally rubbed someone the wrong way, as their building is no longer extant, replaced with nothing in particular but a grassy lot and a sturdy bench.

Kirk’s Pharmacy in the foreground, the Hart office building in the background. Once the tallest building in Marysville, it has now been barely edged out by the new Rideout Hospital (I think. Don’t feel like checking.) 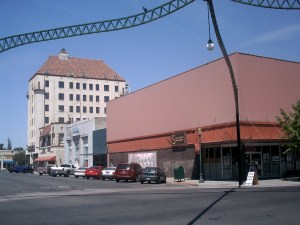 Kirk’s Pharmacy is now Sullivan’s Saddlery, and its upper floor is now encased in attractive aluminum siding the color of a faded bruise.

So that concludes our look at Marysville, Then & Now, nearly a year in the making. But that’s how things roll with the Holy Bee. Remember, every dull, worthless mid-sized town across America has a history worth nosing around in. You’re probably eating your Moons Over My Hammy at a Denny’s that was once a nightclub where someone was beaten to death. Your dry cleaners was once a seedy tattoo parlor. Your middle school was built over a mass grave chock-full of cholera victims. Check it out!