[NOTE: This piece was ported over from a much-older website, and some of the formatting and photo sizes aren’t presented as originally intended. As soon as I hire a quality control staff, these errors will be corrected.]

Welcome back to this little historical photo essay after a long delay. I was originally hoping to complete this series with one more entry, but there is enough material to pad it out to two more. If you haven’t read them yet, click for Part One and Part Two of this series. Onward…

As stated earlier, D Street was once the real main street of Marysville, and E Street (above) was a semi-industrial secondary road. The cars here make are making a big turn to the east and the approach to the now-demolished D Street Bridge. At right, the triangular top of the Hart Building and dark-brick edge of the Hotel Marysville can be seen peeking from behind the white Masonic Lodge building (burned down in 1956.)

E Street is now part of Highway 70, and the main route in and out of town. The Hart Building and Hotel Marysville are now visible, but Cal’s Square Gardens roller rink has been replaced by Mervyn’s. 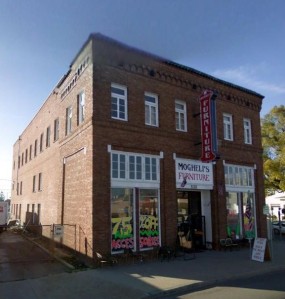 No more PG&E, no more tree. 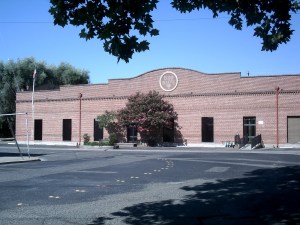 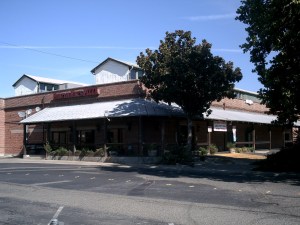 The Virden Cannery complex has been remodeled into retail and restaurant space, but is still mostly vacant.

Union Lumber may still be there, one way or another, but the next few below are long gone… 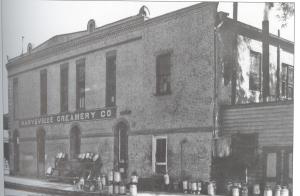 The location of the old Marysville Creamery building is now an on-ramp to the E Street bridge (visible through the trees). 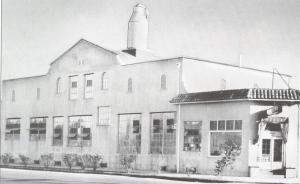 The Marysville-Yuba City Dairy once occupied the southeast corner of 9th and E. 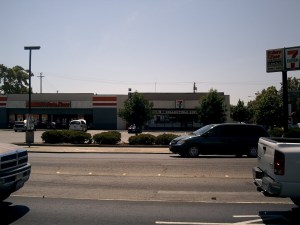 You can still get milk there…and Slurpees, and Sno-Balls, and cigarettes, and batteries, and fan belts, and alternators, and oil filters…

Smith’s Original Owl Cafe was a favorite watering hole for the employees of the old City Hall and Fire Department, originally located across the Maiden Lane alley to the left.

The Original Owl and Maiden Lane are now the parking lot and drive-through of a bank that is itself defunct and vacant.

Hey, at least this bank is still up and running! The Sierra Central Credit Union’s parking lot and drive-though replaced the old Ernie’s Toyland. The alley entrance at the far left is the only clue this is the same location.

The covered, wide sidewalks and enormous display windows of the late 1800’s are gone, reflecting the switch from pedestrian to motor traffic. Also gone is Cunningham’s Tailor Shop. At the same address 100 years later, you can get “Unique Gifts.” 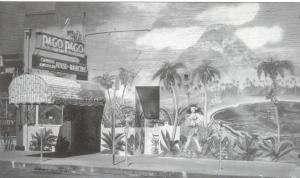 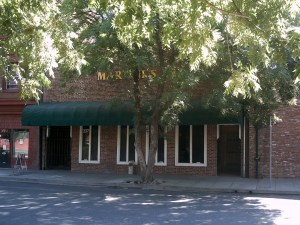 It’s replacement, Martini’s 227, looked like a new mafia hangout. I was going to go in one night, but the metal detector-wielding bouncers and the Insane Clown Posse song blasting from the open door dissuaded me. It closed in late 2009.

I didn’t have access to the upper floors of the opposite building, so I couldn’t quite get the same angle on the picture, but you get the idea. 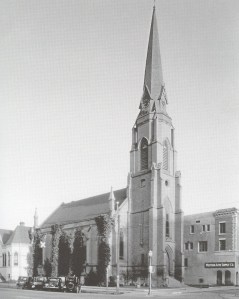 The First Presbyterian Church, 5th and D Streets. Built in 1859.

The church was torn town in the late 1950’s, replaced with this rather bland, boxy retail space.

Ellis Lake, a few blocks to the north of town center, was once home to boaters and water skiers. The fenced area visible in the deep left background was the public swimming pool.

No more boaters and skiers. Just ducks and geese, and all the wonderful things they produce. The remains of the boat ramp are still visible. The swimming pool is long-gone.

The Marysville public pool, called the “Natatorium,” was located on the edge of Ellis Lake at 9th and B.

The Natatorium has been replaced by the Lake Plaza Retail Center. Only the drooping pines in the background tell you this is the same location as the picture above it.