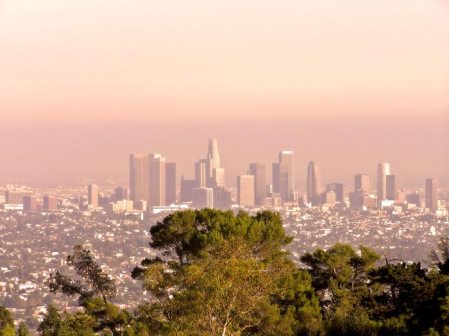 One of my many minor obsessions is the seedy underbelly of Los Angeles. Not so much in the present day, but in the middle part of the 20th century. Although many people associate the noir genre with the grimy alleyways of Chicago or the humid waterfronts of New York, its natural home is really Los Angeles. There seems to be more desperate, broken people in Los Angeles than the rest of the world combined. Many were lured there with the dream of making in big in the entertainment industry and found nothing but disappointment and despair, many others just naturally gravitated there to be in the company of thousands of other drifters, losers, hustlers, thugs, eccentrics, and full-blown psychos. What makes the darkness and ugliness of the place more palpable is it’s glamorous surface, beautiful people doing beautiful things under palm trees and hazy SoCal sunshine. But it’s all a sham. The good life in L.A. is lived by about 5% of its population.

Whether it’s a fleabag hotel downtown, or a (relatively) inexpensive apartment in Covina, on the other side of the door, there’s a good chance that someone’s soul is slowly rotting from the inside out.

Every so often, I get the urge to take a drive down to L.A. and explore. Take a cruise past where the Black Dahlia’s corpse was found. Past the nightclub where the unsuccessful hit on Mickey Cohen went down. Past the blocks and blocks of stucco apartments in West Hollywood inhabited by waiters who want to be actors. Down the notorious skid row of Fifth Street (affectionately referred to in Tom Waits songs as “The Nickel”), where any vice is available for rock-bottom prices. Luckily, thanks to Google Street View, I can get a little taste of it without driving almost 800 miles round trip, discover that the location was obliterated for a Quizno’s, or risk my soft suburban neck in insanely dangerous neighborhoods. 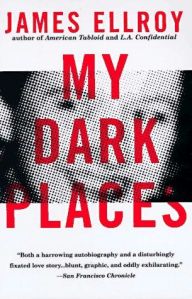 James Ellroy, author of The Black Dahlia and L.A. Confidential, is the greatest current purveyor of period L.A. crime fiction. He knows the subject in and out, because he lived a good deal of his life on the skids in the City of Angels — drunk and pilled up, either homeless or in jail for shoplifting – or breaking and entering plush Wilshire homes to fondle ladies’ underwear.
All of this is revealed in Ellroy’s riveting autobiographical book, My Dark Places: An L.A. Crime Memoir.

It doesn’t take Freud to uncover the reasons for Ellroy’s downward spiral. It was triggered by the brutal slaying of his mother in 1958, when he was ten years old. Ellroy admits his mother, vivacious redhead Geneva “Jean” Ellroy, was not a model parent: she was an alcoholic who was not particular about the company she kept, and would often leave young Ellroy alone at night to go drinking and dancing at the dive bars that lined Valley Boulevard in El Monte, just east of L.A. One night, she didn’t come home. Her strangled body, pantyhose tied around her neck, was found the next morning in the shrubbery next to Arroyo High School. Despite several strong leads, including several eyewitnesses who spotted her with a swarthy man in a blue convertible, the murder was never solved and the case went cold.

Ellroy was placed in the custody of his father, an embittered invalid who was dead (of natural causes) before Ellroy was out of his teens. Once he went through the crucible of being a drug-addled petty criminal pervert and emerged on the other side as a respected author (“The Demon Dog of American crime fiction”), he became interested in the incident that started him down his life’s path. Working with detectives, Ellroy re-opened his mother’s case, and began sifting through the grisly photos and statements, re-interviewing witnesses, and attempting to come to grips with the psycho-sexual hold his mother had over his subconscious for most of his existence.

There are few dark places darker than Ellroy’s, and his unflinching honesty at examining himself, expressed in the same vivid staccato prose he uses in his fiction, makes for a gripping, if sometimes uncomfortable, read.

Another young L.A. thug-turned-writer is Edward Bunker. Bunker spent the late 1940s and 1950s in and out of juvenile hall and foster homes, or living on the streets. Bunker was unable to resist the easy money of drug-dealing and armed robbery, despite an off-the-chart IQ and a taste for Shakespeare and Dickens – which he had plenty of time to peruse once he started doing hard time in places like San Quentin and Folsom prisons. 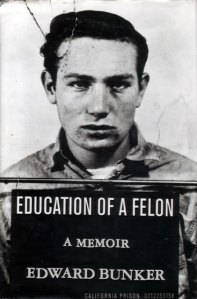 Bunker’s memoir, Education of a Felon, recounts his escapades, both as a criminal and his attempt at a “straight” job: working as an assistant and confidant for the mentally unstable wife of Paramount Pictures’ super-producer Hal B. Wallis. His descriptions of prison life make it sound not so bad for someone who follows the official and unofficial rules, at least until the race wars began in the late 1960s, and suddenly no one was safe. Upon his release in 1975 after almost two decades behind bars, he was already a published author — his autobiographical 1973 novel No Beast So Fierce was adapted into the 1978 film Straight Time, with Dustin Hoffman as the Bunker character. Bunker continued to write and also dabble in bit-part acting – culminating in his crowning achievement, at least as far as most people are concerned: his performance as Mr. Blue in Reservoir Dogs. (“I liked her early stuff – ‘Borderline’ – but when she hit that ‘Papa Don’t Preach’ phase, I tuned out.”)

A special treat: On the bonus disc of the 10th anniversary Reservoir Dogs DVD, there is a driving tour of L.A. with Bunker, where he points out the locations of his nefarious doings. It’s certainly better than ogling the locations on Street View, and you get the benefits of Bunker’s hard-boiled narration. Best part: Bunker’s story of meeting up with future Reservoir Dogs co-star Lawrence Tierney, in the process of putting a beatdown on someone outside of a bar. It was not surprising that Tierney, an actor with one foot in the criminal underworld, and Bunker, a criminal with one foot in the movie world, should have crossed paths in 1950s L.A., almost forty years before they met up again in front of Tarantino’s cameras. This fascinating tour is not included on the most recent (15th anniversary) edition of the DVD. Boo. 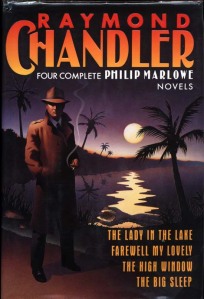 I’ll conclude by acknowledging of the Granddaddy of L.A. Noir, Raymond Chandler. Beginning in 1939, his iconic private eye, Philip Marlowe, smoked, drank, and snooped his way through such classics as The Big Sleep, Farewell My Lovely, and The Long Goodbye. Only Dashiell Hammett equals Chandler as the primary architect of literary noir. Philip Marlowe has been played onscreen by such noted cinematic tough guys as Humphrey Bogart, James Caan, Robert Mitchum and…Elliott Gould?

Yes, Ross and Monica’s father once donned Marlowe’s trench coat and snub-nosed revolver in director Robert Altman’s shaggy-dog 1973 adaptation of The Long Goodbye. Disjointed and quirky as only an Altman film can be, this Long Goodbye is updated from the booze-and-dames 50s to the cocaine-and-nudists 70s. The plot of the book and the plot of the novel are distant cousins, and the new time period allows Altman opportunities to satirize the shallow and hedonistic lifestyles of most of the characters. Gould’s take on Marlowe is decidedly un-heroic, and unlike the rich shadows of traditional film noir, The Long Goodbye utilizes a gauzy palette of washed-out pastels.

Also recommended: The film version of L.A. Confidential (avoid the Black Dahlia film), Wonderland (not a great film, but an incredibly creepy tone and atmosphere), Hollywoodland, Chinatown, any one of Tom Waits’ first seven albums, Chandler’s final Marlowe novel Poodle Springs (unfinished at his death, it was completed thirty years later by Spenser author Robert B. Parker), Ellroy’s novels The Big Nowhere and White Jazz (together with Dalia and Confidential, they make up his “L.A. Quartet”), and what is probably Tarantino’s best film, Jackie Brown (yes, you read that right.)