I had an entertaining couple of days last weekend. As some of you may be aware, the music criticism group/social club Institute of Idle Time is a many-tentacled creature, dipping its beak into multiple areas of media, culture, and society. (Is that a mixed metaphor? Octopi have beaks, don’t they? Let’s assume they do. Onward!) The latest area we have been dabbling in is the burgeoning field of paranormal investigation. Head over to the Idle Time blog PARANOISE for the scoop on the technicalities, ins & outs, whys and wherefores of our new endeavor.

What really started the whole thing was JH’s and my devotion to the Sci-Fi Channel TV show Ghost Hunters, in which the The Atlantic Paranormal Society (TAPS) uses scientific methodology to debunk (or sometimes confirm) reports of paranormal activity. The two lead investigators, Roto Rooter employees by day, are rigorous in their procedures and pragmatic in their conclusions. It’s an entertaining show, even for those who don’t really believe in that stuff. Compare that show to, say, Most Haunted over on the Travel Channel, which eschews the foundations of skeptical inquiry in favor of using hammy, overwrought psychics going into trances and making statements like “I see a man with dark hair…He’s got something wrong with his arm…He says his name is ‘James’” and so on and so forth. Such claptrap makes them rank pretty much below the Scooby-Doo gang in the areas of rational thought and sober-minded analysis. Their target audience seems to be people who see the image of the Virgin Mary in the stucco pattern on the wall of their cramped duplex that smells like a giant litterbox, UFO buffs, conspiracy theorists, and angel enthusiasts. (And thank the deity of your choice that that trend is dying out. Ever worked with one of those loons? Angels, angels, angels.)

The Idle Time crew is generally a pretty jaded, cynical bunch, and all of us consider ourselves hard-nosed skeptics. But at the same time, few of us could resist a jolly outing like a ghost hunt. If a bunch of fucking plumbers could do it, so could we! So at about 11 P.M. on Friday, December 12, JH packed up her EMF meter and voice recorder, 3Dchain grabbed his video camera, MDG strapped on his forehead lamp, and the rest of us (WH, Sherice, Gilly and Idle Time website designer Nina) took along an open mind and headed south out of Sacramento on the river road toward Clarksburg. The Old Sugar Mill in Clarksburg looked like prime haunted material. 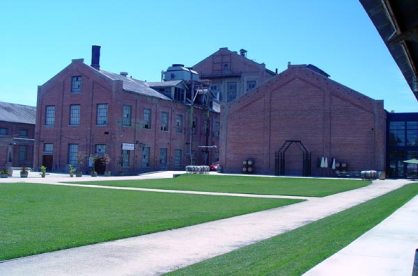 Part of it has been renovated for banquets and weddings and the like, but most of it retains the broken, skeletal appearance typical of abandoned industrial areas. We stopped there first, hoping to ask the janitorial crew for a quick look around, but couldn’t find anyone, although the lights were still on. We decided to return later.

Next, we went in search of a “haunted” location from the bowels of Nina’s memory that may or may not still exist. It turns out that it doesn’t (by luck, we stumbled across the concrete foundations), but we did find this place, a rotting southern plantation-style pile which we quickly dubbed the “Haunted Mansion.”

We, of course, had absolutely no permission to actually enter any of these structures, putting what we were doing somewhere in the gray area between trespassing and breaking & entering. Obtaining clearance from the property owners will be a vital part of the planning process for Ghost Hunt #2. I was less worried about running into tormented poltergeists than running afoul of territorial river folk anxious to exercise their Second Amendment rights into my fleeing backside. Sure enough, right behind the abandoned Haunted Mansion was a brightly-lit, clearly occupied house trailer. Undaunted, WH and 3DChain tumbled from our own little Ectomobile (a Pontiac Vibe) like Navy SEALs being inserted behind enemy lines. MMDG quickly somersaulted from the follow-up vehicle, but kept his headlamp off. Both vehicles had an inability to kill their headlights, so we tore ass out of there, leaving our three investigators alone in the thick brambles surrounding the Haunted Mansion for three full minutes. We returned for personnel retrieval, and they breathlessly informed us that the rear of the building was partially wall-less, but also facing the aforementioned house trailer, derailing the ability to investigate further. We continued down the road.

Our next stop was the town of Locke, a small, ramshackle hamlet built by Chinese immigrants in 1915 (pictured below in daylight).

The main (and pretty much only) street consisted of semi-decrepit little shops and museums, which served not only as a source of livelihood for the 90 or so citizens, but also their places of residence. When we hit town around midnight, the place was totally shut down (even the one bar, Al the Wop’s) and eerily quiet. It looked like a movie set. WH had a bit of a scare when he was investigating one of the back alleys (pictured below left) and heard drawn-out, rasping sigh that seemed to come from nowhere. We determined that he was hearing the sound of one of the Lockians snoring behind their thin, clapboard walls. WH tried to convince MDG to take a picture of the front of one of the buildings, but MDG was fearful that someone might be sleeping under the copious piles of garbage near the open-doored entrance. JH did some EVP work and took several photos (go to the Paranoise blog for the results), and then we headed back north. 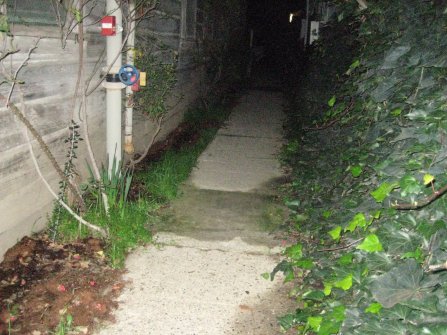 When we returned to the Old Sugar Mill, the cleaning crew was long gone, and there was one car in the parking lot, presumably a security guard. Assuming the security guard was about as competent and motivated as most security guards, MDG and I decided it was safe to investigate a little further. We got around the side of the old, run-down part of the building without ever technically crossing a fence line, providing us with a defense that absolutely, positively would never stand up in any court. But in our adrenaline-addled state, it provided us with sufficient peace of mind to poke around in a dark, off-limits area for several minutes with only moonlight to guide us. The rear of the Old Sugar Mill looked like a tetanus shot or broken ankle waiting to happen, with huge chunks of rusty equipment, and steep drop-offs into mysterious pits and trenches scattered throughout the area.

With the equipment (and our nerve) tested, locations scouted, and a few lessons learned, the first Idle Time Ghost Hunt came to an end, and we headed for the Freeport Bar & Grill to toast our success. It was really only a test run, and our first real investigation will probably be at the Ryde Hotel in Walnut Grove and take place early in the New Year.

And speaking of the New Year, whisper it quietly, but there is the possibility of an Idle Time podcast premiering in 2009. Still in the research & development stages, it may come to pass that the general public will have access to the sound of WH, MDG, myself (and assorted guests) expounding on (mostly) musical minutiae on a regular basis. You’ve read the words, now hear the mellifluous voices!

Saturday was another late night for me as I headed to Woodland to see JH’S and Gilly’s band Ahoy! play at The Stag. After a big dinner at Ludy’s BBQ, (where I met the other members of the band, Julie and Joy, for the first time) we headed across the street to the venue. Woodland’s downtown has been experiencing a resurgence and gentrification over the past few years, and as a result, legendary dive bars such as The Shanty and The Sportsmen’s Lounge have shut down. The Stag is the last of their breed. No bigger than an elongated sitting room, the musical acts that play The Stag are relegated to a small area toward the back. The first band came and went, did a fairly serviceable job, with extra bonus points awarded for a good sound mix for such a small area. WH and I secured seats at the bar, which was another bonus – I don’t like to stand for long periods of time. I am a big fan of sitting. And an ever bigger fan of lying down.

I am a music-lover, but not a musician. My knowledge of music theory and terminology is on the limited side, but a lifetime of listening and voluminous reading on the subject of music history and appreciation (particularly forms of 20th century western popular music) have allowed me to be able to back up my opinions and tastes with confidence. There was one time when I did want to be a musician, and received for my ninth birthday a small Harmony electric guitar, and an amp the size of a shoebox. Never having played a note of any instrument before in my short life, I took it out of its cardboard mail-order packaging, plugged it into its tiny amplifier, grabbed a pick, and…

…made sounds that were still better than the second band that played The Stag that night!

No joke, the second band that played was the worst fucking band I have ever seen take the stage at a venue where people paid money. I will not name them because they seem like the type of band who Googles themselves often, and this blog might come up in a Google search. I am a nice enough guy not to want to hurt anyone’s feelings even semi-anonymously on the web, and what I am about to say about this “band” (let’s just say their name rhymes with “Schmender Schmed”) is bound to be hurtful. But only because they hurt me first with their “busted-ass songs” (to use WH’s phrase).

They opened with a droning, feedback-drenched version of “Amazing Grace.” No, that is not a typo. The vocals sounded as if they were piped in from the first week of American Idol tryouts. There was no sense of rhythm or melody even remotely connected to what was emanating from the performance area. Some bands have the discipline and talent to utilize non-traditional tunings and washes of noise to interesting effect (Sonic Youth springs to mind.) Not these jokers. At first, I thought I was just a philistine unable to appreciate the jagged, complicated tone-poems of Schmender Schmed. But the pained look on everyone’s faces assured me that I wasn’t flying solo in my belief that these people should be forcibly restrained from picking up or even looking at a musical instrument ever again. (I mentioned to WH at about that time that a good alternate band name for them would be “The Room-Clearers,” because that was the effect they were having.) And if they looked like nervous, amateurish first-timers, they might have won some sympathy points. But no, they pranced about like preening, strutting divas. The guitarist even sported a set of Bono shades, presumably because the neon Bud Light sign serving as a makeshift spotlight was a just too much illumination. JH remarked later that the only time she wore sunglasses in performance was when they were playing outdoors facing the glare of the setting sun, and she still felt like an ass.

This wretched excuse of a performance set the table for Ahoy!, who tore through a stomping, thirty-minute set secure in the knowledge that they were following a clusterfuck of the first order, and were bound to sound even better by comparison.

So if you’re perusing the Scene section of your local periodical, looking to take in some live music on a Saturday night, if you see a “band” whose name rhymes with “Schmender Schmed,” give them a wide berth. (Presuming they escaped The Stag that night without being fell upon and slaughtered by a group of torch- and pitchfork-carrying patrons who had paid a five-buck cover charge to listen to their self-satisfied, tuneless, masturbatory garbage.) 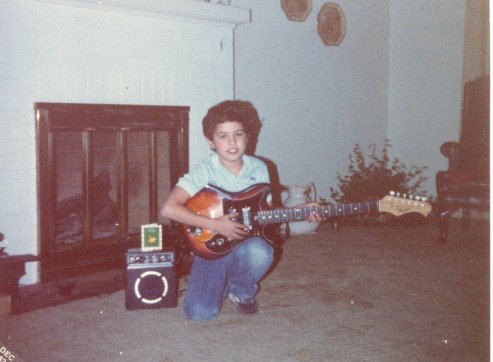 Filed under Life & Other Distractions